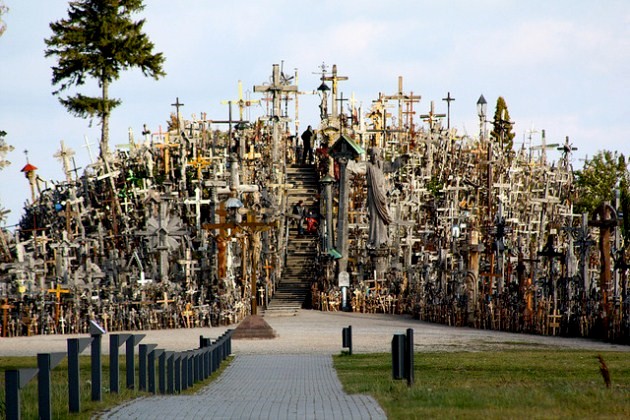 The Hill of Crosses

“On a hill far away stood an old rugged cross…”

I have found myself singing this old hymn over and over since returning from Lithuania on Monday. I was in Lithuania with three of our leaders to visit United Methodist churches that Royal Oak First has been partnering with for nearly twenty years. The journey was truly transformational!

I have been singing this old hymn because of an unforgettable stop we made just outside of the city of Siauliai in northern Lithuanian. It is a remarkable place—a place that really sums up the history of the Lithuanian people and the significance of our mission with them.

During the 50 years of brutal Nazi and Soviet occupation, a time when organized religion was forbidden, crosses by the dozens and sometimes the hundreds would appear on this hill, a symbol of resistance and hope during this time of violent oppression. Every time crosses showed up on this hill, the Soviets would bulldoze them down in an attempt to further crush the resolve of the Lithuanian people. But the crosses would reappear every time! Finally the Soviets stopped taking them down and by 1990, the end of Soviet occupation, it is estimated that over 50,000 crosses were planted into that scared ground. That hill stood as a testimony that the God made known in Christ Jesus was stronger than all the forces of evil and hatred. It was a reminder that God was still present and at work despite every effort to destroy the faith.

Today this is holy site has become a place of pilgrimage for faithful people all over the world. They come to plant a cross of their own, a sign of their trust in the same healing and resurrecting power that the Lithuanians held onto during the darkest hours of their history. Today nearly 200,000 crosses are planted on that hill. Kim and Chris Christopher planted a cross there when our partnership with the Lithuanian Methodists began, our hope joining the hope of the faithful people from around the world.

The ministry of the United Methodist Church in Lithuanian faces many odds. They may be small and under resourced but they are like the crosses on that hill—they are a sign of hope! A sign of hope to the people of their communities and to their partners across the ocean.

Thank you for your continued prayers and support of our brothers and sisters in Lithuania. You are one of their signs of hope!

“I will cling to the old rugged cross, and exchange it someday for a crown”